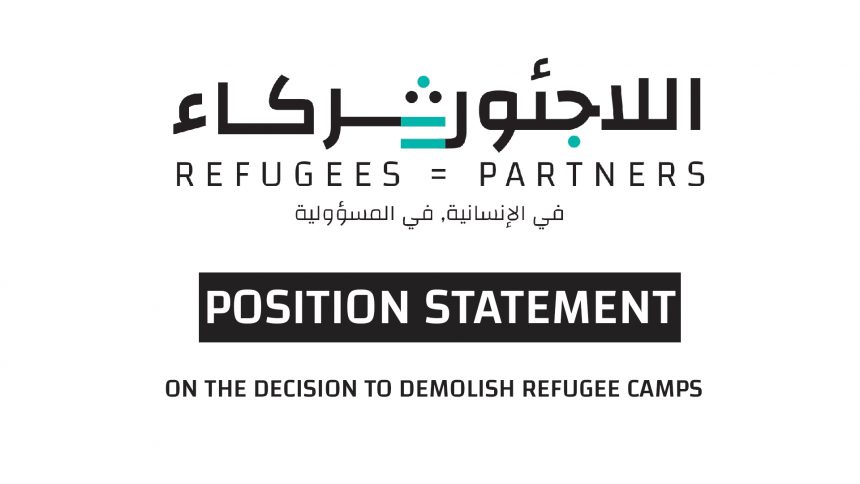 Position Statement on the decision to demolish refugee camps

On April 24, 2019, the Lebanese Army entered the Yasmin refugee camp near the town of Bar Elias in the Beqaa Valley, and demolished 110 tents that had been donated for use in emergency situations under the claim that these tents were empty of refugees. While this demolition did not lead to the displacement of any family, it was considered a threat to 465 families living in this camp and few other surrounding camps after they felt that their security and habitat were at risk, and especially as some security personnel announced to camp residents that “they will be next in turn”[1]. The “Refugees = Partners” project was informed that the Lebanese Army is in the process of demolishing all tents that include concrete construction in all refugee camps in the next few days.

This demolition recalls the previously instructed memorandum issued by former Interior Minister Nihad al-Mashnouk in June 2018, regarding the decision to demolish four cement camps in Arsal, which was not implemented after being restricted by Al Mashnouk himself. This also evokes the demolition of the refugee camps in the areas surrounding Riaq airport in 2017, which have led to the destruction of about 80 tents and the displacement of the families who left without any trace.

The commonality between these decisions is that they have been issued and implemented by the Ministry of Interior without any validation or justification and without taking into consideration their effect on a fundamental human right; the right to shelter.

The former decisions differ from one another in terms of the issuing authority: The decisions undertaken by the Ministry of Interior could be understood from a legal perspective and within its authority to implement the construction law, whereas the military establishment does not enjoy the same mandate except in case of an emergency declared under a law issued by Parliament, which would also determine the rights versus the restrictions within a limited time period under the same law.

The “Refugees = Partners” project requests that the military establishment to clarify the actions taken in the refugee camps, especially in terms of their legality and non-violation of individuals’ rights, and its threat to their security and safety. It is also important to emphasize that the authority of the Ministry of Interior in implementing the construction laws do not justify the demolition of refugee camps while neglecting other illegal constructions, knowing that these constitute major problems in Lebanon, as a result of failed governmental policies over the years. Hence, any action based on the application of the construction law, which targets exclusively Syrian refugee camps, is considered discriminatory on a racial basis. On the other hand, it is not possible to imagine any comprehensive measures towards illegal constructions in all Lebanese territory or in the areas where refugee camps were established, except through an integrated housing policy set by the government in which it reserves the right to housing for all its residents.

This latest security action is seen as a pressure tool on the most vulnerable and poorest groups of refugees, the one’s living in camps, and which could be perceived as an instrument of pressure to forcibly return refugees “unsafely” to Syria, or to be displaced within Lebanese territories, which contradicts the security interest of the state. It is important to mention that the refugees who live in camps are a minority, whereas the vast majority of refugees live in rented houses and apartments.

The “Refugees = Partners” project calls for the attention of the authorities responsible for these decisions, especially the Ministry of Interior, to take the necessary action to defend its position and role in the decision-making relating to housing policies. As for the military establishment, it is necessary to publish a justification to explain the reasons behind the demolition of the former 110 tents, and to reconsider the demolition orders as they violate the basic rights of the population, and to assess its negative impact on preserving and protecting national security, which first and foremost requires providing alternative accommodations for any camp that shall be demolished under an informed decision.

[1] Statement of the Union of Relief and Development associations in Lebanon, 24 April 2019, Beirut